2010-2011 Arizona Travel and Recreation Guide
Selected as one of two art galleries in Carefree & Cave Creek
as 'a must-see.' 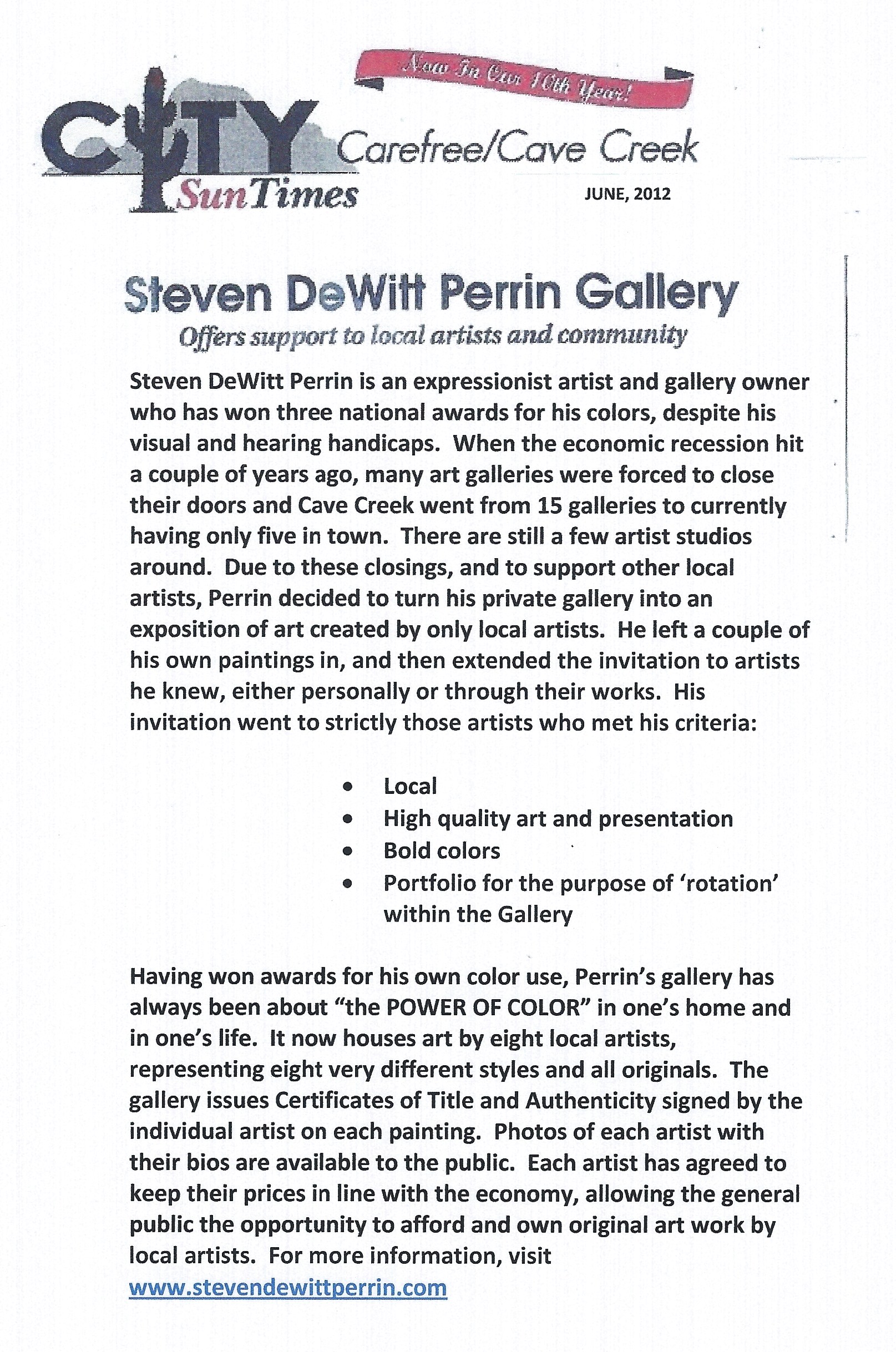 FOR VALLEY ARTIST STEVEN DEWITT PERRIN, there was nothing the world that could stop him pursuing his creative passion – not even his visual impairment and hearing disability.

Born with congenital progressive auditory neuropathy and congenital progressive optic atrophy, Perrin struggled back and forth with what he wanted to be growing up. He dabbled in everything from sports, military school, creative writing and illustration to even fashion modeling and acting. However, nothing quite sparked his interest and intrigued him more than the aesthetic of art did. “To me, art is what one does creatively in life and thinking outside the normal realm, thinking deeper than what the eyes and hands can see, touch, or feel,” Perrin says. “Art is simply the language of the soul.”

Perrin specializes in contemporary expressionism paintings and currently runs his own gallery in Cave Creek where he showcases his work as well as others’ masterpieces. Despite his disabilities, he overcame his own fears of how the public, publications and other artists would perceive him and positively continues to celebrate the spirit of independent expression with each piece he creates. “I am after the emotions and the textures, personifying inanimate objects or nature, using my spray water bottle on my canvas like rain on land, which in turn blossoms new growth, new ideas and new challenges,” Perrin says.

With a tremendous amount of support from family and friends and inspiration from all around the artist puts all of his passion into every brush stroke. He incorporates a story in each of his paintings to share his meanings and experiences as well. “My narratives are true stories and are not written to sell my art,” Perrin says. “When I create a painting and finally decide to let go of it and put it up for sale, I am also letting go of a part of my spirit, my heart and all the memories and feelings I associate with it.”

Perrin has had numerous spotlights and successes over the years including being exclusively invited to exhibit his artwork at the 2008 NFL Super Bowl XLII Tailgate Party in Glendale and has painted several murals at Grayhawk Elementary School in North Scottsdale. He has also judged various art competitions and taught after-school art classes throughout Cave Creek and Paradise Valley.

By Sonja Heller, The Republic

Hearing and visually impaired from a young age, Cave Creek artist Steven DeWitt Perrin wanted to blend in. He attempted team sports and tried hearing aids until it was more un-cool to wear them.

“Growing up, to this day, I have always tried my best to fit in with those who did not have disabilities, to feel normal. All except in one area – art,” Perrin said.

In this area, he stands out with his bold use of color and unconventional approach.

It’s only in the last few years that Perrin, at the age of 36, learned that the source of his progressive vision and severe hearing loss congenital auditory and optic neuropathy. It is not fully understood what causes either; but the result is permanent hearing and vision loss.

The Cave Creek community has been welcoming, he said, even as his paintings do not fit into the norm of Southwest landscapes and cowboy art. The town turned out to be the perfect fit for an artist who honors his own vision.

“I am always challenging my eyes to see what they cannot see and sometimes close my eyes and paint, or paint without contacts to challenge myself,” Perrin said.

Perrin often takes low-resolution camera photos in super-macro mode of his subjects’ textures. With his contacts removed and using the photos for reference, he gets really close to the canvas and feels the texture.

Perrin often sees a finished painting in his head before he starts, but then goes with the flow.

“I like my art to be spontaneously combustible, explosive to the eye, if you will,” he said.

He works very close to the canvas, even if it’s large-scale work. He paints under extremely bright lights.

“My mind sees what my eyes don’t see; my brush in hand paints what my mind visualized. I knew what to do and how to do it,” he said. “I just had to practice more than most in order to become accomplished at what would normally be easy things for someone who has vision and hearing.”

Instead of the young artist establishing himself at any of the hundreds of galleries in the Northeast Valley, Perrin decided to open his own gallery. There were several reasons why he chose to do this. He was somewhat intimidated by the larger galleries. The large chunk of commission that gallery owners took seemed unfair. He feared falling victim to an owner who sought to bring in art that was popular at the time.

But another primary reason was that he didn’t want to be told what to do and how to do it.

“I like to keep my style edgy,” he said, “and I enjoy being in the studio and listening to loud music.”

He hosts regular auctions for his works. He has “Christmas in July” marketing promotions. He used to paint just outside his gallery so he could interact with visitors until a swarm of bees stopped that.

Don’t explain your art, he was told. That takes away from the experience of the art viewer. Since owning his own gallery and taking the time to talk with the patrons, Perrin has learned that people are curious about the artist process: Where the idea came from; why a piece is titled as it is; and why he chose certain colors or techniques. Perrin writes a short narrative to accompany his works.

“Let your paintings speak to people on their own, artists said. But people come into the gallery and are thrilled that I have written a narrative, and wish more artists would do the same. I hope they see my love of art and writing and that I have a sense of humor,” he said.

A work in progress

While other artists are insistent that people wait to see their work until it’s completed, Perrin might show an in-progress piece. He’ll trot it out to his gallery and watch the public’s reaction. It can help him with “letting go” of a certain piece of art.

“Often times the public falls in love with an abstract (first layer) painting as is, and I mentally start to let go of an original idea I had for it,” Perrin said. “(Or)…after watching the public’s reaction, I take it back home and work on my original vision. I always strive to create conversational pieces for people who are passionate about thinking outside the box.”